Royal College of Surgeons’ of England

You are here: ...
Home / About Medical Artist Ltd / Memberships & Training / Royal College of Surgeons’ of England 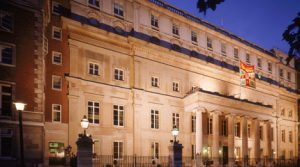 Being able to study at the RCS meant enjoying access to the RCS’S huge range of cased specimen exhibits both those held out of public view in the pathology unit as well as those held on public display in the Hunterian Museum. In order to study anatomical structures with in the human body itself, further tuition was carried out with dissected cadavers. Being taught anatomy with dissected cadavers proved invaluable. To see structures in situ on a human body is a privilege.

Being able to see first-hand the proportions of real anatomy was incredible, such as tiny, tiny nerves, to the surprisingly large size of the aorta, to seeing muscle fibers run their different direction to understanding how muscle structure is made up of multiple bundles of cells. To see the white almost translucent connective tissue layers of the fasciae. To see anatomy in this way has been fundamental in Joanna’s ability to draw anatomy accurately.

The history of the RCS started with a trade guild called the Barber-Surgeons in 1540. It was a London livery company that examined trainees within the City of London. It is at this time that Surgeons were becoming more established and wanting their own identity the Barber-Surgeons split. Looking for a premises of their own a property was bought in Lincoln’s Inn Fields 1796 as well as the purchase of the museum of the late surgeon and scientist John Hunter. So in 1800 at Lincoln’s Inn Fields, The Royal College of Surgeons of London was formed with the Hunterian Museum opening slightly later in 1813.

This wonderful resource continues to be a unique place with which to return in order to draw anatomy referring to real specimens and is an ideal resource when working on client projects.